Round 17: Rain, Breeze and Coffee

The day delivered steady rain with occasional heavy showers and a fresh breeze.

Some optimistic skins golfers gathered for coffee and a chat before departing empty handed. 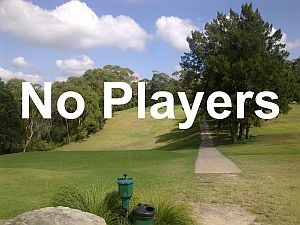 No skins play possible for 20th August due to lack of players. 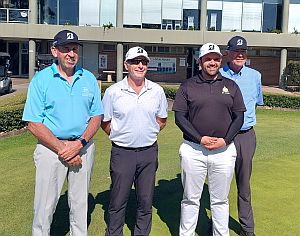 This year PeterD entered the Castle Hill Handiskins tournament and the top four made it into the final held on Wednesday 17th. You can read all about it on the Handyiskins Castle Hill site.

Peter started slowly but was quietly confident with years of experience in the tough NT Skins competition. As we all know, skins trophies are won on the back nine! He went on to win seven skins on the 12th and followed with two skins on the 15th. 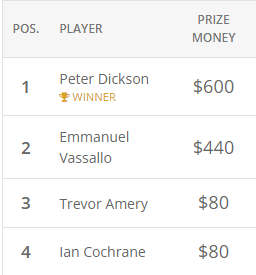 Round 15: A Second Steve Success 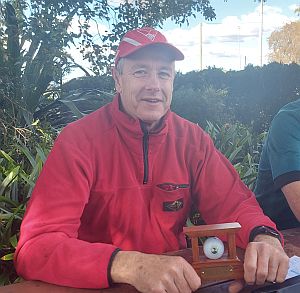 Steve's good form continues with 6 skins won by the 8th hole and he could not be caught despite the best efforts of PeterD. Steve is lately making a habit of overcoming PeterD in close contests. Craig played well and led our stableford scores in addition to winning the B grade stableford prize.

The course was much drier than the previous round and we enjoyed the helpful blue lines provided to show the preferred pathway on the fairways.

The Nth Turramurra competition was single stableford and 2BBB as usual. The A Grade winner scored 38 points and B Grade winner was Craig with 33 points.

Mark with a tee shot to 5 mbs.

The tee shot on the 4th tee by PeterH: PeterD called it the shot of the year!
The ball travelled forward, almost clearing the hazard in front of the tee, it struck a rock hidden in the long grass, rebounded to the right, landed on the pathway, bounced to the back of the teeing area, struck one of the sandstone blocks, and finally stopped at the rear of the tee. The result was a loss of 10 metres.

On the par three 16th, Mark reached the green before discovering that he had played a wrong ball.

The weather was sunny and breezy. Some fairways were waterlogged and the preferred path was marked with a blue line. For this round, hole 6 was out of play with 2 stableford points awarded.

You must not make a stroke at a wrong ball.

If you and your opponent play each otherâs ball during the play of a hole, the first to make a stroke at a wrong ball gets the general penalty (loss of hole).

If it is not known which wrong ball was played first, there is no penalty and the hole must be played out with the balls exchanged.

you must correct the mistake by continuing play with the original ball by playing it as it lies or taking relief under the Rules:

The stroke made with the wrong ball and any more strokes before the mistake is corrected do not count.

If you do not correct the mistake before making a stroke to begin another hole or, for the final hole of the round, before returning your scorecard, you are disqualified.

The next match is booked for Saturday 17th September. The first tee time will be around 09:00.

All drops must be from knee height.

Ball must land in and come to rest in relief area.

Ball is lost if not found within 3 minutes.

4. Putting with flagstick in.

Repair of almost any damage to green now allowed.

6. Ball or ball-marker moved on green.

No penalty for accidental movement of ball or ball-marker on green.

Replace ball with no penalty.

9. Touching Line of play on green.

Tennis RSS will be listed here ... 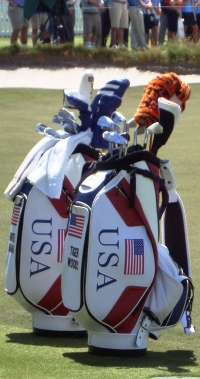