What are the Skins Records?

Here are the top skins scores made since the start of the 2006 season.

What Are the Skins Rules?

1. Stableford handicaps are used to decide the skins result on each hole.

2. The Dam Rule on the 9th hole is cancelled due to the psychological effect on some players.

4. All players must play two qualifying rounds at North Turramurra before being eligible to compete in the Skins unless otherwise ratified by the committee.

The table below lists the results of all matches resolved by Countback since the beginning of the 2008 season. (Last updated 28-May-2022)

Who wins the Xmas Classic?

There are records of the Christmas Round going back to December 2005.

Who wins the Bradman Award?

The Bradman Awards were not always treated seriously but there are some records going back to 2005.

"I regard golf as an expensive way of playing marbles."

"The uglier a man's legs are, the better he plays golf. It is almost a law."

"Golf. A plague invented by the Calvanistic Scots as a punishment for man's sins."

"Although golf was originally restricted to the wealthy, overweight Protestants, today it is open to anybody who owns hideous clothing."

"You know what they say about big hitters ... the woods are full of them."

A Nassau bet is usually a competition amongst amateur golfers.

The Nassau is one of the most popular golf tournament formats and golf bets. It's essentially three tournaments (or bets) in one: the front nine, back nine and 18-hole scores all count as separate tournaments or bets.

A Nassau is sometimes called Best Nines, or 2-2-2 when referring to a $2 Nassau.

2BBB Split Sixes Stableford is a competition for a full field.

How do you play Split Sixes?

Split Sixes is a competition for three players.

There are six points available at each hole. If someone wins it outright then they get 4 points. The second best score gets 2 points and the third zero. If one person won the hole and the other two halved then it would be 4-1-1. Two players halving and beating the third 3-3-0.

How to remove stickers from golf club shafts

New Golf clubs often arrive with a number of stickers and price tags glued to the shaft.

The stickers can be removed by scraping etc or by applying some heat to the shaft and pulling the sticker from one corner.

This leaves glue residue on the shaft to be removed with a solvent. The easiest way to remove this is to rub the shaft with a cloth soaked in WD-40. Followed by cleaning with soapy water and a cloth.

How to Repair Pitch Marks 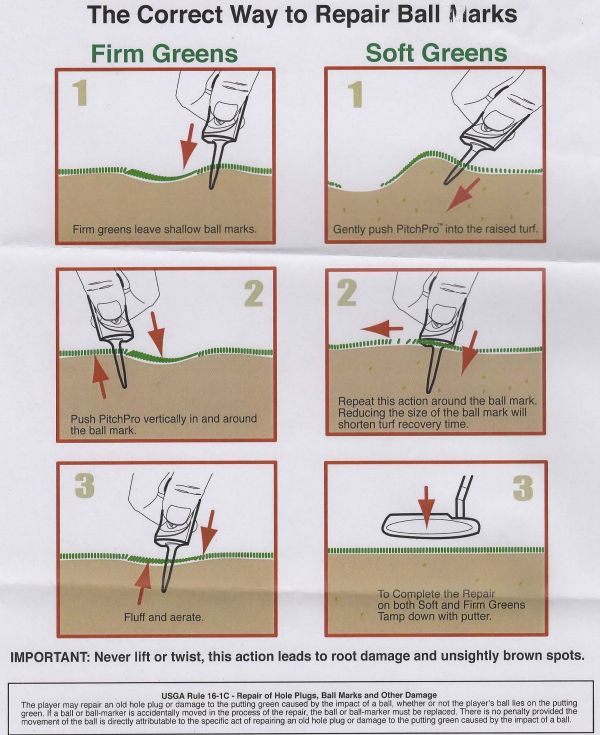 Who has won the Triple Crown?

What is the Code?

The Code No 1: Play it where it lies! (except in smelly water or rabbit holes).

What is the Origin of 'Skins,' as in 'Skins Game'?

From an article by Brent Kelley.

Which leads us to our frequently asked question: Why "skin"? Where does the term "skins" originate?

A. So: Why are "skins" called "skins"? And how did skins games come be called what they are?

There is no definitive answer to the question, unfortunately. There are, however, a couple of commonly offered explanations, and one of golf's governing bodies also weighs in on the question. And a new contender for the origin has emerged from the Oxford English Dictionary, 2nd Edition (see "update" below).

Do a Web search, or ask enough golfers, and the most common explanation for the origin of "skins" is likely to the one provided by the Web site The Straight Dope (www.straightdope.com) in attempting to answer the question:

"The skins game supposedly originated centuries ago in the holy land of golf, Scotland. ... According to legend, furriers arriving in Scotland from other countries, having sailed for months in leaky boats with other smelly sailing men, icky stacks of decomposing hides, rats, and other privations, would, instead of looking for female companionship, a bath, or a decent meal, opt for a round of golf before heading into town. ... (T)hese furriers gambled their pelts or 'skins' on golf and the name stuck."

The biggest problem with this story is one of logic. Would furriers who'd been at sea for months, possibly longer, really head for the golf course before heading to a pub or a brothel? We find that very difficult to believe.

It's also difficult to believe that anyone spending months trapping animals for their hides, and months more on the sea sailing to and from distant lands, would gamble their livelihood. They could take those pelts to market, after all, then gamble a little bit of the money they made.

As The Straight Dope pointed out, this version of the origin of "skins" is a legend.

Another explanation, more believable but not as frequently offered, is that "skins" derives from the word's connotation of "skinning" an opponent. If someone lost a hole for a large amount of money, they might be said to have been "skinned alive." This meaning of "skin" is well-known, if no longer common in everyday use. It means to fleece or swindle someone.

Which brings us to one more possible explanation. This one is offered by the Library of the United States Golf Association in its FAQ. Given the source, it seems the most credible, even if their explanation doesn't hold the same charm as the first one, or make as much sense as the second one. The USGA Library writes:

"As a format of golf gambling, 'skins' has been around for decades, but really only became popular after the creation of 'The Skins Game' in the 1980s. In other parts of the country, 'skins' is also known as 'cats,' 'scats,' 'skats,' or 'syndicates.' Of these, 'syndicates' seems to be the oldest term, going back at least to the 1950s, and possibly earlier. It has been suggested that 'skins,' 'scats,' etc., are simply shortened, simplified versions of the term 'syndicates.' "

We'll grant you, that's not the most satisfying response. According the USGA Library, the term goes back only to an antecedent from the 1950s. That rules out Explanation No. 1 from above. And the USGA's take, while an etymological one, focuses on a different etymology than that offered in Explanation No. 2 above.

So we'll simply conclude by repeating what we said earlier: Given the source, the USGA's explanation seems the most credible, even if their explanation doesn't hold the same charm as the first one, or make as much sense as the second one.

A new contender has emerged, courtesy of Paul Cary, director of the Jones Music Library at Baldwin-Wallace College in Berea, Ohio. Paul turned to the Oxford English Dictionary, 2nd Edition, and discovered this in the OED2's entry on "skins":

From the definition of skin, n

The possibility that the golf use of "skins" derives from its serving as slang for "dollars" certainly makes great sense, given the nature of skins games (where "skins" often represent a dollar amount). However, it does conflict with the USGA's "syndicates" theory, which can't be dismissed since the USGA says that "skins" are called "syndicates" in some regions. But given that two different words are in use, perhaps both explanations can be valid.

The 2007 LG Skins game will be hosting it's 25 Silver Anniversary addition in 2007 at the new Celebrity golf course at the Indian Wells Resort in Indian Wells, California Nov. 24th - 25th coinciding with the Thanksgiving Holiday weekend. Steven Ames and John Daly replaced Annika Sorenstam and Tiger Woods in 2006 with Ames emerging victorious. Ames will defend against Skins Game mainstay Fred Couples who is joined by Skins Game newcomers Zach Johnson and Brett Wetterich.

Fred Funk provided one of the funniest moments in recent Skins Games two years ago when Annika Sorenstam out drove him on the third hole which then caused Funk to 'don' a pink skirt which he pulled out of the bag and wore all the way to the green. High on entertainment value for the millions watching on television and leaving all three of his fellow competitors laughing and 'in stitches', Funk then proceeded to clean up both days taking the 2005 Skins Game title with a total of 15 Skins and $925,000.00. (Funk became the oldest Skins Game winner in the history of the event surpassing Gary Player who accomplished that feat in 1983 at the age of 48.)

Fred Couples was shut out that year for the first time in the history of his participation in the event. Couples won the Skins Game the previous two years with winning totals of $605,000 & $640,000 respectively, and holds several Skins Game records including victories (5), appearances (13) and earnings ($3,515,000).

The Skins Game is traditionally one of the most widely viewed golf events since its inception in 1983.

That tradition continued to be innovative with the addition of LPGA super star Annika Sorenstam beginning with the 2003 Skins Game, (where she won $100,000 the first day), and the affable Fred Funk. (Annika was shut out of the money in 2004 and again in 2005).